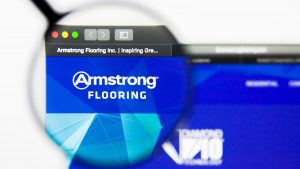 April 2022 ended on a truly grim note for Armstrong Flooring. AFI stock plunged 75%, falling below 50 cents a share. It fell even further two days ago upon news that the NYSE would prepare to delist it.

After markets opened today, though, AFI quickly began skyrocketing. By high noon, it has risen over 200%. The last time the stock rose, it was on rumors of a sale.

After months of struggling, it’s not surprising that Armstrong Floor is about to be delisted. A statement released earlier this week by the NYSE notes the following;

NYSE Regulation reached its decision that the Company is no longer suitable for listing pursuant to Listed Company Manual Section 802.01D. The Company filed a petition for relief under Chapter 11 of the U.S. Bankruptcy Code in the U.S. Bankruptcy Court for the District of Delaware on May 9, 2022 and, as disclosed by the Company in its Form 8-K submitted to the SEC on May 9, 2022, holders of the Company’s equity securities will likely be entitled to little or no recovery on their investment.

With that in mind, the question remains as to what is driving AFI’s unprecedented surge this afternoon?

It seems 13D filing with the U.S. Securities and Exchange Commission (SEC), which shows that Esopus Creek has a 5.1% stake in AFI, is driving interest. However, today’s performance from AFI stock should also be attributed to speculative price action. It is unlikely that such a disclosure would drive a company up by so much, particularly one on the verge of delisting and bankruptcy.

Anyone looking for proof of the speculation pushing up AFI stock need only check social media. Twitter (NYSE:TWTR) investors are watching it closely, but some are floating the theory that its surge is part of a pump-and-dump scheme. Such a scenario is not uncommon in the world of penny stocks, particularly ones upon which Wall Street has given up.

Investors should remember that AFI stock is about to delist and face bankruptcy. In such proceedings, common stock will essentially become worthless. That means any gains, no matter how impressive, will be short lived.

On the date of publication, Samuel O’Brient did not hold any position (either directly or indirectly) in the securities mentioned in this article. The opinions expressed in this article are those of the writer, subject to the InvestorPlace.com Publishing Guidelines.

Why Carvana Stock Skidded to an 18% Loss Today