The stock market returned to its bearish sentiment during the regular trading session on Thursday, with some high-profile financial reports weighing down the mood among investors. By the close, the Dow Jones Industrial Average (DJINDICES:^DJI), Nasdaq Composite (NASDAQINDEX:^IXIC), and S&P 500 (SNPINDEX:^GSPC) were all down sharply, giving up a portion of their extensive gains from earlier in the week.

Once again, though, what happened after the close of the market at 4 p.m. ET made market sentiment reverse course. On Thursday, it was the fourth-quarter financial report from Amazon.com (NASDAQ:AMZN) that suddenly reminded market participants how the biggest companies in the world keep finding success.

Below, we’ll take a look at Amazon’s whirlwind ride on Thursday and why it just might have saved the stock market from further losses in the immediate term. 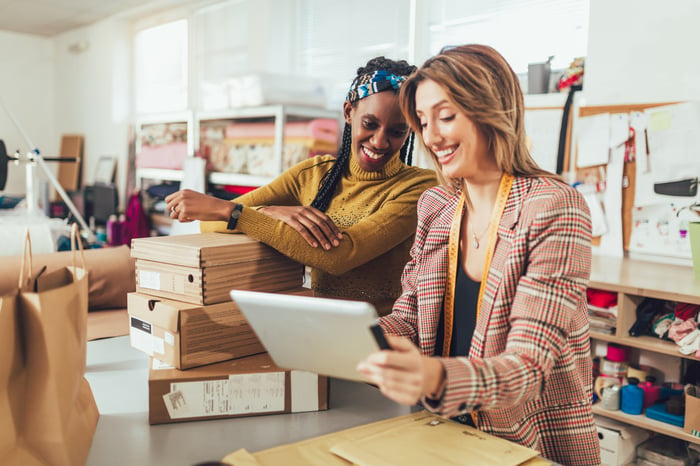 Shares of Amazon.com were down almost 8% in the regular session on Thursday, as investors anticipated that there could be bad news from the pioneering e-commerce company. However, the stock regained all its lost ground and then some after hours, climbing 14% as of 6:30 p.m. ET.

Amazon’s headline numbers were impressive, but they came with some caveats. Net sales were up 9% year over year to $137.4 billion. Net income nearly doubled from year-ago levels to $14.3 billion, working out to $27.75 per share.

However, this-year’s profit numbers included an $11.8 billion positive pre-tax gain attributable to the initial public offering of electric-vehicle company Rivian Automotive (NASDAQ:RIVN), without which earnings would have been sharply lower. For the full year, Amazon sales were up 22% to nearly $470 billion, and net income of $33.4 billion translated into earnings of $64.81 per share.

On an operating basis, Amazon faced some challenges. In North America, sales were up 9% year over year, but the company posted an operating loss of $206 million, compared to a year-earlier operating profit of nearly $3 billion. A similar swing sent international-segment sales down 1% and cost Amazon $1.63 billion in losses.

However, Amazon Web Services once again showed the power of the cloud. Segment sales jumped 40% from the prior-year’s quarter, and operating income climbed 48% year over year.

Solving a problem $20 at a time

What got the most attention from Amazon investors, though, was the company’s decision to boost the price of its Amazon Prime subscription service. The annual fee for Prime will now be $139, representing a price hike of $20 per subscriber. Those who prefer monthly subscriptions will pay $14.99, up $2 from the previous monthly charge. Renewals after March 25 will pay the higher rate, as will new subscribers after February 18. That offers some time for customers to sign up at the current lower rate.

Amazon boasts more than 200 million Prime members worldwide, so if the company can hold onto all of those subscribers, the price increase will collect $4 billion in additional cash for Amazon. That could be important, given Amazon’s swing to negative free cash flow during the fourth quarter — largely due to massive investments in expanding Prime to offer more video, music, gaming, and reading content, along with the unlimited shipping perks from the service.

Amazon’s news proves that even massive companies can still grow, especially when they have the pricing power to pass on higher costs to consumers. Amazon’s big turnaround immediately sent futures contracts on stock market indexes higher. It’s entirely possible that a reversal from Thursday’s declines could end up providing the boost that growth-stock investors need to regain confidence in the market’s prospects for 2022.


Read More: Amazon Might Just Have Saved the Stock Market

How to Beat the Market the Rest of the Year?

3 No-Brainer Stocks to Buy During the Bear Market