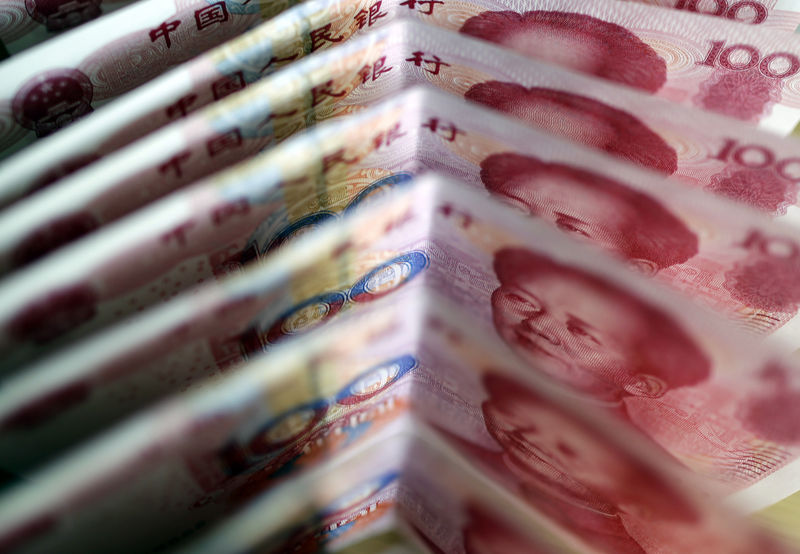 Investing.com– China’s yuan sank to a new two-year low on Wednesday as anticipation of an upcoming Federal Reserve rate hike boosted the dollar, while concerns over slowing economic growth in the country also weighed.

The fell 0.3% to 7.0394 to the dollar, its weakest level since July 2020. It also marked a third consecutive session spent below the psychologically important 7 level.

The biggest source of pressure on the yuan was strength in the U.S. dollar. The jumped 0.6% on Tuesday and was pinned near 20-year highs in anticipation of an at least by the Fed later today.

The yuan now faces a growing rift between local and U.S. interest rates, which has been a key reason behind the currency’s losses this year. The People’s Bank of China on Tuesday, after cutting them several times this year to boost growth.

The Chinese government has to maintain a balancing act in unlocking more stimulus to help economic growth while ensuring that the yuan does not depreciate any further. The currency has fallen despite a series of bullish midpoint fixes by the central bank, and is among the worst-performing Asian units this year.

Economic growth in China has slowed substantially this year, largely in part due to Beijing’s zero-COVID policy. Lockdowns in major economic hubs such as Shenzhen and Chengdu ground business activity to a halt, and also severely undermined investor confidence in the country.

On Wednesday, , a major industry group, warned that China’s attractiveness as an investment hub was being eroded by its reluctance to budge on the zero-COVID policy.

The policy has resulted in sporadic lockdowns this year, and kept China’s borders largely shut to international travel. Beijing backed its stance by stating the need to prevent its health system from being overwhelmed, as well as preventing loss of life.

New ambulance company wants in Mobile, but potential competitors say there are enough

A Bull Market Is Coming: 2 High-Conviction Growth Stocks to Buy Now and Hold

If You Invested $10,000 in Axsome Therapeutics 5 Years Ago, This Is How Much You…

Goldman Sachs gives its verdict on the Coles share price