Movie theater chain AMC Entertainment (NYSE:AMC) is a “meme stock,” one of the most popular stocks on Reddit, and a badge of honor for retail investors after its massive short-squeeze price action last year helped the company avoid bankruptcy.

It was an astonishing story that made headlines, but stories do end. Over the past several months, the market has been much harsher toward speculative and unprofitable stocks, and AMC has fallen steadily. It might be time for investors to prepare for the possibility that AMC becomes a penny stock, and here’s why it could happen this year. 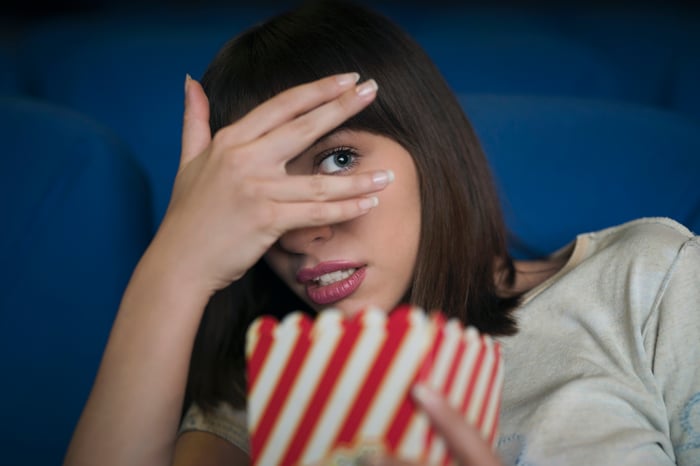 People couldn’t go to the movies when lockdowns took hold in 2020 to prevent the spread of COVID-19. That was problematic for a movie theater chain — revenue fell 77% from 2019 to 2020, totaling just $1.2 billion for the latter year.

Losses piled up with business so slow, which put financial stress on the company, because it was losing money even when running at full capacity. Between debt and selling new shares, AMC did what was needed to stay in business. 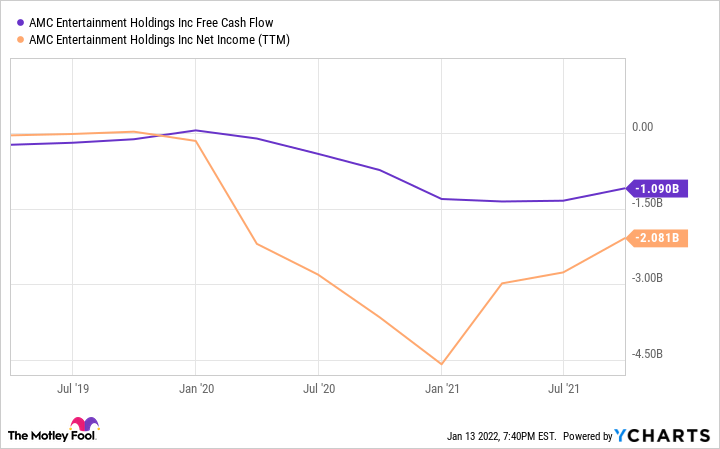 The share price was roughly $2 heading into 2021. Short-sellers heavily targeted the stock, borrowing shares to sell them in hopes of repurchasing them later at a lower price. But last year, a surge in retail interest created a short squeeze on AMC stock, sending it as high as $72, a 36-fold increase in just a few months.

AMC management smartly capitalized on this momentum, issuing 11.55 million shares to raise $587 million in cash to bolster the balance sheet and get the company out of financial peril.

Most retail investors are familiar with how the “AMC Apes” came to the company’s rescue, keeping it alive with its short-squeeze aided fundraising. Unfortunately, you will see a bigger picture that doesn’t bode well for shareholders if you look beyond the feel-good story.

AMC’s actions to stay afloat before the short squeeze have severely bloated the number of outstanding shares. The company had roughly 100 million outstanding shares entering 2020, and that figure has increased five-fold over the past 24 months. 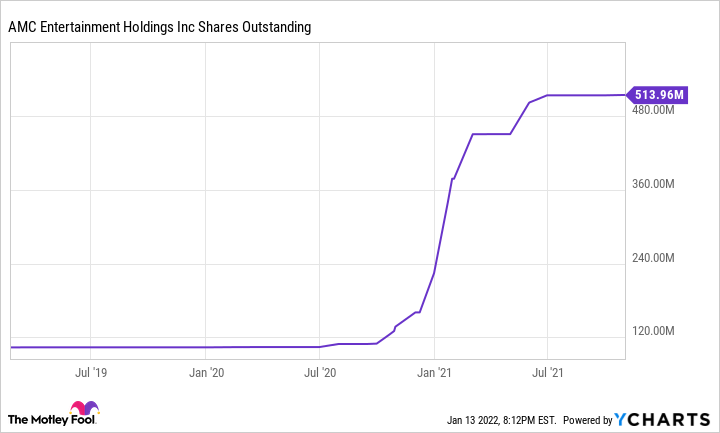 When a company issues new shares of stock, it doesn’t make the company any more valuable. The money it raises comes from making the existing shares worth less. Think of it like a pie cut into four slices, then 16 slices. The pie itself didn’t get any bigger — you just get a smaller piece of the pie.

In terms of the stock, this means each share investors own represents less revenue, less cash flow, and less income from AMC’s total. In this case, shares are worth roughly 80% less than when there were just 100 million shares, assuming everything else stays the same with the stock’s valuation.

Could AMC fall under $5?

However, things didn’t stay the same. Not only have many shareholders seen their stakes diluted, but the company’s fundamentals have deteriorated. The $1.6 billion on AMC’s balance sheet as of the third quarter will keep the company running, but for how long?

Remember that revenue fell almost 80% in 2020, and through the first nine months of 2021, revenue was up only 26% from the low bar set in the previous year. In other words, the business isn’t even close to recovering to pre-pandemic levels, and AMC reported losses of over $1.1 billion in 2021 year to date.

Vaccinations had people return to social outings, but Omicron’s rapid spread over the past few months could put the brakes on AMC’s rebound. If you give the company the benefit of these doubts, and it returns to 2019 business levels, AMC still posted a net loss of $149 million, despite reporting nearly $5.5 billion in revenue that year.

AMC would be a penny stock if it traded at the same valuation it did before COVID-19, but the business is arguably in far worse shape today, and that’s before you factor in the massive increase in the share count. The theater chain made for a great story and helped create the “meme stock” category in 2021, but stock prices tend to follow fundamentals over the long term, which isn’t a good sign for AMC investors.

Dinerazo Makes Investing Accessible and Affordable for the Hispanic Community

Why Nauticus Robotics Shares Are Trading Higher By 96%; Here Are 67 Biggest Movers…

EXCLUSIVE: Top 10 Stocks Searched On Benzinga Pro In September: Where Do Tesla,…

$1.2 Million Bet On ChromaDex? Check Out These 4 Penny Stocks Insiders Are Buying By