The stock market has been extremely volatile, but long-term investors once again reaped the rewards of their patience on Wednesday as major stock indexes continued to regain ground. Bond markets cooperated with lower rates, helping to establish the stock market’s supremacy as an engine for financial growth.

The Nasdaq Composite (NASDAQINDEX:^IXIC) once again performed best among major averages, but the Dow Jones Industrial Average (DJINDICES:^DJI) and the S&P 500 (SNPINDEX:^GSPC) didn’t get left behind.

After the close of the regular trading session, investors got a further treat when Walt Disney (NYSE:DIS) reported strong financial results that sent its stock soaring. Yet one key player in the software-as-a-service space managed to score even more impressive gains. Below, we’ll look more closely at Disney and then reveal the software-as-a-service (SaaS) stock that turned heads late Wednesday afternoon. 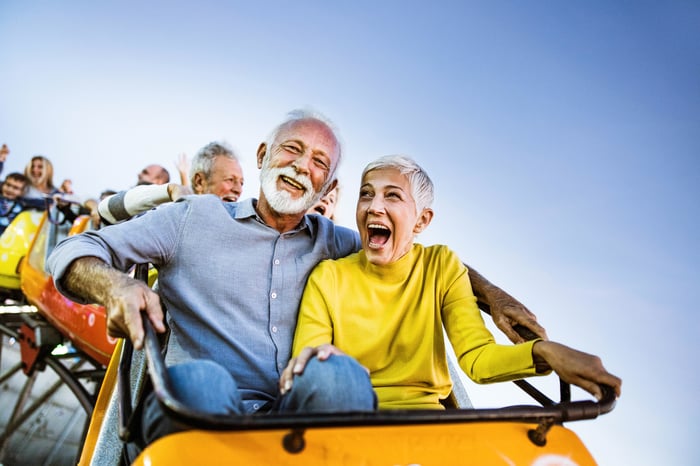 Shares of Disney finished the regular session up more than 3%, but the best gains came after the company’s fiscal first-quarter financial report. The stock gained almost 8% more after hours on Wednesday afternoon.

Disney’s numbers showed a massive rebound from the challenges of the year-ago period. Revenue climbed 34% year over year to $21.8 billion, and adjusted earnings of $1.06 per share came in at more than triple what they were in the first quarter of fiscal 2021.

The key driver of Disney’s recovery was the parks, experiences, and products segment, which saw revenue more than double year over year. The best results came from domestic parks, which generated more than triple the revenue they did in the year-earlier period. Operating income for parks went from massive losses to even bigger profits, and only sluggish performance from the consumer-products division held back the segment.

Meanwhile, results from the media and entertainment distribution segment were more subdued, with sales growth of 15% and a decline in operating income of 44%. Challenges for cable and broadcasting continued, but 40% growth in international subscribers to its Disney+ streaming service helped boost total subscriber counts to nearly 130 million worldwide. Solid gains in average revenue per paid subscriber also pointed to health for the new business.

Disney came into the week with a lot of uncertainty. The results allayed fears, and the return of confidence was obvious from the stock’s jump.

Twilio’s financial performance largely silenced skeptics. Fourth-quarter revenue of $843 million was up 54% year over year, closing a year of 61% sales growth for the 12-month period. Adjusted losses for the quarter widened to $0.20 per share, but that was still better than most investors had anticipated from Twilio. The company brought in 35,000 new customer accounts over the past 12 months, bringing its customer count to 256,000. Although dollar-based net expansion rates fell to 126% for the quarter, that was largely due to the heavy political communications volume in the year-earlier period in 2020.

Moreover, investors were pleased with Twilio’s guidance. First-quarter revenue of $855 million to $865 million would be 45% to 47% higher than year-ago levels, with organic growth coming in at 32% to 34%.

Twilio has done a good job of combining strategic acquisitions with growth inside its core business. That’s been a recipe for smart expansion, and after a big pullback in the stock price, Twilio shareholders like what they’re seeing for 2022.

Can You Really Retire a Multimillionaire With S&P 500 ETFs?

2 Top Software Stocks to Buy for the Long Haul

The Fed sees economic pain ahead. Stock markets are feeling it now.