At least 33 stocks notched fresh lows in early morning trading on Wednesday while shares of Eli Lilly traded near all-time highs dating back to 1952.

Here are some of the names that hit fresh lows:

Shares of Apple are slipping Wednesday following a report that the company is pulling back production of its new iPhone as demand falters.

That could be an opportunity for investors to snap up shares, said Brandon Nispel of Keybanc.

“We view this as negative for AAPL today, however, believe it is neutral to consensus expectations and would take advantage by buying on the pullback,” he wrote in a Wednesday note.

Keybanc data suggests that hardware revenue for the iPhone is still strong, and that Apple’s market share is solid and possibly improving.

“Further, AAPL was hoping to ramp up iPhone 14 units, though if the higher level of demand never materialized, it likely represents no change to consensus expectations,” Nispel wrote. He added that Apple has done this before – last October, the company cut iPhone 13 production citing chip shortages.

“Our central case is a hard landing by the end of ’23,” Druckenmiller said at CNBC’s Delivering Alpha Investor Summit in New York City Wednesday. “I will be stunned if we don’t have recession in ’23. I don’t know the timing but certainly by the end of ’23. I will not be surprised if it’s not larger than the so called average garden variety.”

And the legendary investor who has never had a down year in the markets fears it could be something even worse. “I don’t rule out something really bad,” he said.

Famed short-seller Carson Block told CNBC on Wednesday that many ESG-focused companies are “money grabs” taking advantage of the U.S. government and some investors.

“I would like to save the world,” he said during an interview with “Squawk Box” outside CNBC’s Delivering Alpha conference. “I believe that we do have problems. However, these companies that I’ve seen, are not the ones who are going to save us. Many of these are just money grabs, dressed up — clad in green.”

The S&P 500 bounced slightly off the new 2022 low on Wednesday following the Bank of England’s bond-buying plan to stabilize the falling British pound.

Treasury yields fell hard after the Bank of England ended plans to sell gilts and instead announced it would temporarily buy bonds to calm markets. Expectations for Federal Reserve rate hikes also declined in the futures market.

“We’ve gone from QE to QT back to QE,” said Greg Faranello of AmeriVet Securities. The U.K. 10-year was at 4.02%, from a high of 4.58%. QE refers to quantitative easing, or central bank bond buying, while QT refers to central banks ending purchases and potentially selling bonds instead.

“When rates move like this very, very quickly, liquidity comes into question,” said Faranello. “It means collateral, it means margins, it means the potential for further dislocation…It tells you there’s a problem with the plumbing. There’s a problem under the hood.”

Faranello said fed funds futures pointed to a terminal rate of 4.35% Wednesday morning, below the Fed’s own target of 4.6% for an end point for its fed funds rate. The futures market in recent sessions had been pricing a high water mark of 4.75% for fed funds by early next year, he noted.

The British pound slumped, falling 1.32% against the dollar to $1.0612, Wednesday morning after the Bank of England announced it would begin temporarily buying long-dated bonds in an attempt to keep financial markets stable.

“Some might argue this is even more inflationary, so the GBP should collapse,” wrote Dennis DeBusschere in a Wednesday note of the BOE’s announcement. “But that is probably only true if the BoE doesn’t follow through with aggressive rate hikes.”

That means that even more short rate increases are now necessary, and how the GBP trades from today will be telling, DeBusschere wrote.

“If the GBP holds up, tail risk will be reduced,” he said, noting that the GBP’s move lower since the news is not good so far.

These companies are making headlines before the bell:

Shares of Apple were down nearly 4% in premarket trading after a Bloomberg report, citing people familiar with the matter, said the tech company is ditching plans to increase new iPhone production after demand fell short of expectations.

Apple reportedly was aiming to increase assembly of the iPhone 14 product family by as much as 6 million units in the second half of this year before telling suppliers to stand down.

Semiconductor suppliers such as Qualcomm and Skyworks were also down following the report, falling 2.9% and 2.5% in the premarket, respectively.

The move in Apple, which has an outsized weighting in the S&P 500 given its $2.4 trillion market cap, will likely make it difficult for markets to bounce back.

The British pound got a brief boost Wednesday after the Bank of England said it would buy long-dated UK government bonds in an effort to stabilize the country’s currency.

European stocks were sharply lower on Wednesday as global markets sold off on economic concerns surrounding inflation and the growth outlook.

The pan-European Stoxx 600 fell 1.9% by mid-morning, with banks and insurance stocks plunging 4.2% to lead losses. Healthcare was the only sector in positive territory, adding 0.7%.

The negative trade in Europe comes after a torrid night for markets in the Asia-Pacific.

Credit Suisse says it’s time to enter the green hydrogen sector, with a number of catalysts set to drive the clean energy powerhouse.

“Green hydrogen is a growth market — we increase our 2030 market estimates by [over] 4x,” the bank said, forecasting that green hydrogen production will expand by around 40 times by 2030.

It names two stocks to play the boom — giving one upside of more than 200%.

CNBC Pro: Asset manager reveals what’s next for stocks — and shares how he’s trading the market 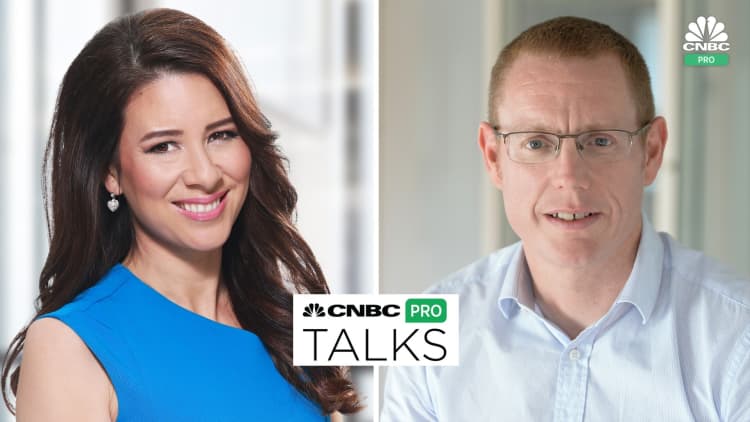 Neil Veitch, investment director at Edinburgh-based SVM Asset Management, says he expects the macro landscape to remain “quite difficult” for the remainder of the year.

Speaking to CNBC Pro Talks last week, Veitch named the key drivers that could help the stock market to turn “more constructive” and shared his take on growth versus value.

Earnings questions, potential recession mean more selling could be ahead

The Dow and S&P 500 have fallen for six straight days, with many of those seeing broad selling typical of so-called “washout” days.

That can sometimes be a contrarian buy signal on Wall Street, but many investment professionals are skeptical that the selling is over. One reason is that earnings expectations for next year still show solid growth, which would be unlikely in the event of a recession.

Additionally, the dramatic moves in the bond and currency markets means that “something broke” and it may be smart to wait for that information to shake out, Smith said.

On the positive side, Smith pointed to a strong labor market and signs of continued spending on travel as a sign that the U.S. economy may be able to avoid a major recession.

Stock futures rose slightly after trading began at 6 p.m. Dow futures rose more than 60 points at one time, though those gains have since shrunk.

Nasdaq 100 futures had the biggest early jump of three, suggesting that tech may continue to outperform on Wednesday.

Though Tuesday’s closing levels showed relatively modest daily moves, the S&P 500 fell below its previous intraday low for the year during the session. That move was seen by many as confirmation that the summer rally for stocks has failed.

The S&P 500 is now 24.3% off of its record high, and the Dow is also in bear market territory, down roughly 21.2%. The Nasdaq Composite, whose decline dates back to last November, is 33.2% below its high-water mark.

The next key metric for investors in the days ahead could come from the bond market, where the 10-year Treasury yield has surged to just below the 4% level.

If You Invested $1,000 In SPY Stock When Donald Trump Left The White House, Here’s How

Can These 2 Cybersecurity Stocks Get the Nasdaq Back in Bull Mode?