Down 76% in 1 Year, This E-Commerce Stock Could Deliver Massive Gains Down the Road


E-commerce companies performed exceptionally well during the heat of the pandemic as consumers relied on online platforms to purchase goods. Popular online shopping stocks like Amazon, Shopify, and Etsy went on massive bull runs as a result, returning 75%, 258%, and 518% to investors from April 1, 2020 through Dec. 31, 2021, respectively.

The narrative has shifted of late. As threats from COVID-19 diminish and consumers return to brick-and-mortar stores, e-commerce companies have been left with unfriendly comparable metrics from a year ago. One high-risk, high-reward e-commerce stock that has been particularly crushed in recent memory is Jumia Technologies (JMIA -6.06%), Africa’s leading platform for online shopping.

Down 76% in one year and 38% year to date, the African e-commerce stock continues to tumble in the wake of several macroeconomic headwinds. Yet, the company has demonstrated notable improvement in recent quarters, and given its ongoing pullback, long-term investors should consider climbing on board today. 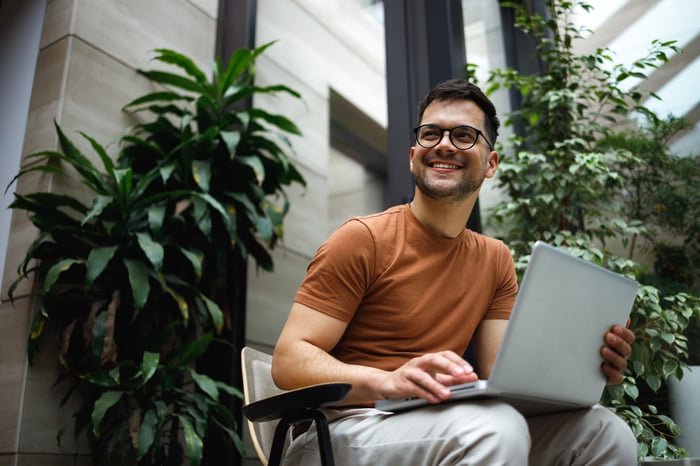 The business is gaining strength

Management has been very transparent with its plans to increase spending in order to grow the platform. This has led to monstrous losses for the company, however — its adjusted loss on an EBITDA basis jumped 70% to $55.3 million in the first quarter versus a year ago. For the full fiscal year, management is guiding for an EBITDA loss in the range of $200 million to $220 million.

There are some positive takeaways associated with its recent losses. On top of its improving growth, the company believes that it’s past the peak of adjusted EBITDA losses and that it should start reporting a lower year-over-year loss beginning in fiscal 2023.

Likewise, Jumia is evolving into much more than an e-commerce marketplace. The company’s JumiaPay, which functions similarly to PayPal, is planning to expand to third-party merchants in the near future. Serving as its financial technology (fintech) wing, JumiaPay grants the company enormous potential for growth in the years to follow. Together with its logistics-as-a-service offering and other early-stage ventures like its e-doctor service via the JumiaPay app in Nigeria, it’s clear that the company’s runway for growth is beyond massive.

Now is the time to buy

The African growth story is alive and well — with over 1.2 billion consumers spread across the continent, the potential for growth and innovation is endless. Jumia’s market capitalization is only $749 million today, and the stock trades at a forward price-to-sales multiple of just three, which is the lowest it has been since the company went public in 2019. The stock is surely a risky investment, and the company is likely years away from achieving profitability.

That said, as of today, I believe the potential reward outweighs the inherent risk. Jumia is building something special, and given the progress it has made of late, I think the stock warrants some serious consideration.


Read More: Down 76% in 1 Year, This E-Commerce Stock Could Deliver Massive Gains Down the Road

The politics of stagflation