European shares and US stock futures gained some respite on Tuesday following a severe sell-off in the previous session that plunged Wall Street into a bear market as the prospect of aggressive tightening by central banks rattled global investors.

The moves followed a day of sharp selling on Wall Street, where the S&P 500 tumbled almost 4 per cent to close at its lowest level since the start of 2021 and government bond yields soared.

The benchmark US equity gauge ended Monday down more than 20 per cent from its all-time peak in January, a scenario typically referred to as a bear market.

The rout for global equities was triggered by a higher than expected reading of US inflation on Friday, which stoked expectations that the US Federal Reserve could implement an extra-large rate rise of 0.75 percentage points at its monetary policy meeting, which concludes on Wednesday.

Analysts were divided, however, on whether Monday’s moves were overly bearish.

Economists at Goldman Sachs raised their forecast for the federal funds rate to include rate rises of 0.75 per cent in both June and July, warning that if the Fed’s moves met market expectations, it “would imply a meaningful further drag on growth”.

But cross-asset strategists at JPMorgan wrote in a note to clients that they believed “the Fed will surprise dovishly relative to what is now priced.”

Friday’s inflation report showed consumer prices had jumped 8.6 per cent from a year ago in May as Russia’s invasion of Ukraine raised food and fuel costs.

Futures markets showed traders expect the benchmark US federal funds rate to climb to 3.5 per cent by the end of this year, compared with the current range of between 0.75 and 1 per cent.

“Over the past two weeks, markets have added 110 basis points to the Fed rate hike expectation for the coming 12 months and are now pricing the effective fed funds peaking around 4.10% in summer 2023,” said Jussi Hiljanen, rates strategist at SEB.

“I don’t think we’re actually at peak fear yet,” said Ross Mayfield, investment strategist at RW Baird. Short-term recoveries in risk assets “feel like classic bear market rallies”, he said. “I just don’t think the market is going to believe in peak inflation until we actually see it has peaked, and there’s probably another leg lower for markets.”

Anticipation of sharper rate rises has also driven up yields on government debt, which rise when bond prices fall. On Tuesday the yield on the 10-year US Treasury declined by 0.08 percentage points to 3.3 per cent, having on Monday touched its highest level since 2011. 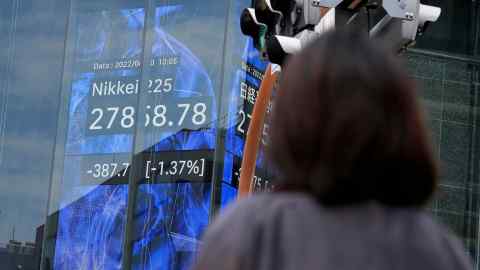 The technology-heavy US Nasdaq Composite share index closed Monday’s session down almost 5 per cent, taking year-to-date losses to more than 30 per cent. Bitcoin fell about 4 per cent on Tuesday to $22,279, taking the most widely held cryptocurrency more than 50 per cent lower this year.

In Asia, China’s CSI 300 recovered losses earlier in the session to add 0.8 per cent on the day. Japan’s Topix closed down 1.2 per cent and Australia’s benchmark S&P/ASX 200 index closed 3.6 per cent lower.

Best Penny Stocks to Buy in June? 3 to Watch Today

Dow Jones Futures: Why This Market Rally Is So Dangerous; Tesla Nears Bear Lows On…

Air freight services market size is estimated to grow by USD 58.45 billion from 2021…