The S&P 500 (SPY) stabilized on Thursday despite finishing lower again, but there were positive signs as some of the risker names finished higher with notable gains from the likes of AMC Entertainment (AMC), Coinbase (COIN), Lucid (LCID), GameStop (GME), Netflix (NFLX), Palantir (PLTR) and others. Bond yields also stabilised and volatility across both bonds (MOVE) and equities (VIX) also calmed from recent spikes. However, sentiment remains terrible and has markedly worsened since Target (TGT) and Walmart (WMT) reported earnings in the middle of the week. Investor sentiment gauges from the CNN Fear and Greed, AAII and Investor Intelligence surveys all show we are near to peak fear. This can often lead to powerful countertrend rallies.

This determines how you see equity and bond markets performing over the next year. If you see inflation lasting longer than expected, then both the bond and equity market have not fully priced this in, and there is more downside to come. Things could get very ugly. However, if you tend to agree with the theory that we are near peak inflation, then this dip represents a good buying opportunity.

We also are unsure of how the Fed will “blink”. After decades of having the markets back, is the Fed now truly turning its back on equities with its “pain” message? Powell is sounding more and more like Paul Volcker, who torpedoed the equity market to tame raging inflation in the early 1980s. Does the Fed have the stomach to tank the equity market? Back in the ’80s, equities were a much smaller part of the economic pie. Now pain for equities means pain for the vast majority of US households as US holdings of equities have soared since the Great Financial Crisis, and that pace has picked up since the pandemic. So if Powell breaks equities, he breaks the economy, period.

Plenty to ponder then. Short term, we expect an options expiry led rally due to poor liquidity. Next week we get more retail earnings. The market has now marked consumer stocks down sharply post Walmart and Target. More bad news is expected, so the risk reward is skewed higher.

To the charts! Thursday’s shock and awe has not seen a fresh low, and this is important. The panic reaction to the news is not reflecting this. The SPY did not test last week’s lows. If this holds, then the long-awaited countertrend rally is on and expect a push to $415 as the first test before a higher test at $435. That is where we then think the rally is overextended. 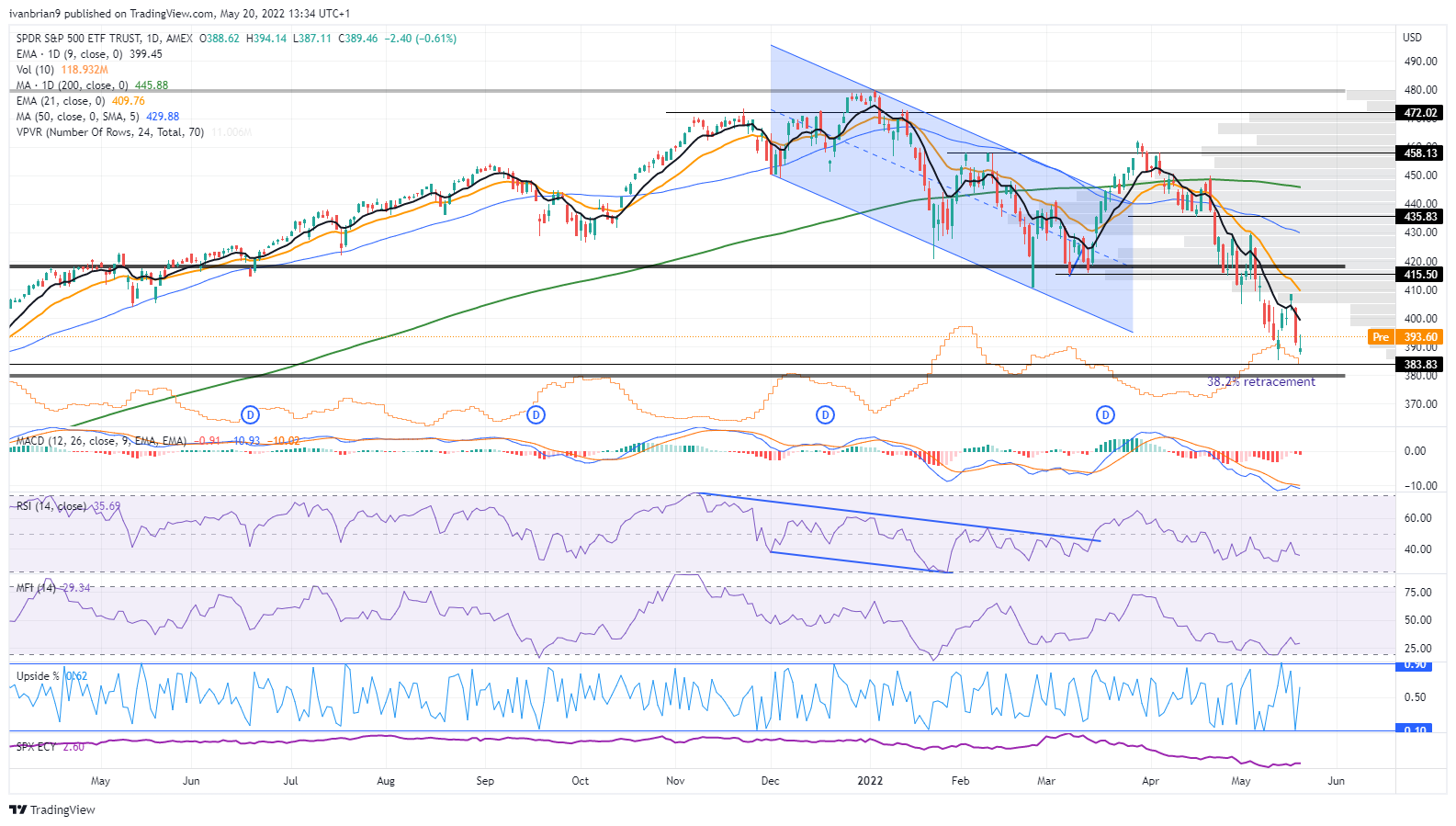 When Will the Bear Market Roar Again?

Tail end of the S&P countertrend rally is nearing – BTIG