Is This Distressed Growth Stock About to Make a Comeback?


If you have the guts for it, buying a stock that other investors scorn can be a great way to pick up shares of companies with good bones at a steep bargain. If fortunes turn, you’ll get to be the proud contrarian who saw the true potential of the business as a bonus — assuming that its fortunes do turn.

After crashing by more than 80% over the last year, it isn’t a stretch to say that GoodRx‘s (GDRX -5.02%) stock is a beaten-down shadow of its former self. In case you aren’t up to speed, the company helps people save money on prescription medications.

GoodRx is a growth-stage business, and fixing the healthcare system’s prescription drug inefficiencies is the main component of its business model. It accomplishes this by negotiating with pharmacy benefit managers (PBMs) and pharmaceutical drug manufacturers and reducing the inefficiencies that drive up their costs — pricing potential customers out of the market. Then, the company takes a cut of the savings it passes on to patients.

Its trailing 12-month sales are near $788.3 million, and unfortunately, that’s where the trouble begins. For a growth stock, it simply isn’t expanding very quickly. In the past three years, its quarterly revenue grew by almost 100%, but its sales from prescription transactions and pharmacy manager solutions actually contracted quarter over quarter between the end of 2021 and the first three months of 2022.

That could mean it’s reaching the end of the easily addressable inefficiencies for its stakeholders or that its penetration of the consumer market for lower-priced prescriptions is plateauing. Both would be bad news, and both would be reflected by worsening margins. On that note, take a look at this chart: 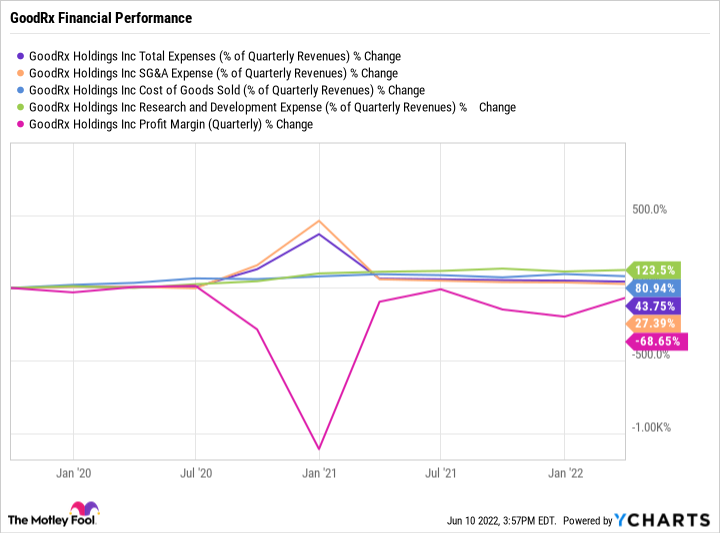 As you can see, since late 2019, its total expenses; selling, general, and administrative expenses (SG&A); research and development expenses, and its cost of goods sold have all increased quite significantly as a proportion of quarterly revenue, leading to a collapse in the company’s profit margin. When you add in the market’s sour sentiment about growth stocks this year so far, the decline of GoodRx’s shares isn’t very much of a mystery.

Things are looking up

The good news is that GoodRx is improving, and the recent slowdown in its revenue growth could soon prove to be just a bump in the road. Roughly 80% of the people who try its prescription savings program end up using it again at some point, and its service has around 6.4 million monthly active users. It grew its monthly active user base by 12% over the last year, and it also added 29% to its base of paid subscription plans, in which consumers pay a nominal fee for even greater prescription discounts.

Growing its user base and paid subscribers means that its revenue base will be highly recurring, which would help to mitigate some of the impact of an overall slowdown in growth. It’s also a sign that it hasn’t yet fully penetrated its target markets, which is a major positive point.

Plus, while consistent profitability remains an issue, its total expenses have fallen significantly as a share of quarterly revenue since the first quarter in 2021, so its efficiency is improving.

And its valuation is significantly lower than it was a couple of years ago. Whereas its price-to-sales multiple was over 42 right after its initial public offering in late 2020, it’s now around 4.2, and the business is significantly stronger. In the current market, that valuation won’t be a strong draw for new investors, but it won’t be a barrier to price appreciation like it might have been a year ago.

In short, there are a few indications of progress toward a comeback for GoodRx, but its shares might take a long time to recover, especially if the improvements to its margins stall along the way. For daring investors, it’s worth a purchase today at its cheaper valuation, but for those with an average risk tolerance, it’s a better idea to follow up in a few quarters to see if things are on the right track before taking the plunge.


Read More: Is This Distressed Growth Stock About to Make a Comeback?

Entering the metaverse: How companies can take their first virtual steps