On Sept. 21, Beyond Meat (BYND 2.88%) and Yum! Brands‘ (YUM -0.13%) Taco Bell announced they were finally releasing their first menu-item collaboration. This comes after months of media speculation that a co-branded menu item would never happen for these two companies.

And yet, that’s not the biggest part of this news story. Rather, the price point for this menu item is something that Beyond Meat shareholders should pay utmost attention to, because it could be the key to future returns for this investment.

Beyond Carne Asada Steak is a big deal

In October, Taco Bell will test Beyond Carne Asada Steak at 50 restaurants in Ohio. If consumer reception is good, the restaurant stock could roll out the menu item across its nearly 8,000 locations. It might also create more co-branded menu items with Beyond Meat, but that’s not the most important thing here.

This new menu item from Taco Bell is also Beyond Meat’s first attempt at steak. It potentially opens up an entirely new product line, but that’s not what caught my eye, either.

The most important aspect of the new menu item is the price point. The Beyond Carne Asada Steak will be the exact same price as regular carne asada steak. Therefore, consumers can buy the plant-based option without worrying about the cost, and that’s a first for Beyond Meat.

This announcement comes 18 months after Beyond Meat and Yum! Brands first announced their partnership. The long wait fueled speculation that nothing would come of it. In Dec. 2021, a Bloomberg report suggested the partnership was on the fritz after Taco Bell canceled a carne asada test. And this past July, Bloomberg again pointed out that Beyond Meat had yet to deliver for Taco Bell. It seems that getting the plant-based product just right simply took time.

Beyond Meat went public in 2019. And in its first quarterly earnings call, CEO Ethan Brown laid out the company’s vision by saying, “We are very committed to this notion of at least one category with one important product within five years or less [underprice] animal protein.”

The new menu item still falls short of Brown’s goal — being the same price isn’t the same as underpricing it. Moreover, I don’t believe you can call a limited-time, limited-availability menu item an “important” product, and the pricing seems to be of Taco Bell’s own choosing.

Keep in mind that Beyond Meat could simply choose to underprice animal protein today with all of its products, but it would be losing an outsized amount of money, making the effort unsustainable. Therefore, the company’s goal to underprice meat with its plant-based products goes hand-in-hand with its goal of greater than 30% gross-profit margins.

There’s still so much further to go

Brown pushes his company to constantly improve the taste, texture, and smell of its plant-based products so these aren’t barriers for consumers. Its plant-based hamburgers, for example, have undergone several iterations already.

Now imagine a day when the price of Beyond Meat isn’t a barrier, either. That could be the final catalyst the company needs to take significant market share.

However, Beyond Meat isn’t able to execute its pricing vision yet, because its profit margins have lagged for more than a year now. There are various factors at play, but the outcome is the same: Beyond Meat is burning cash as it is. It can’t lower prices further and increase its cash burn. 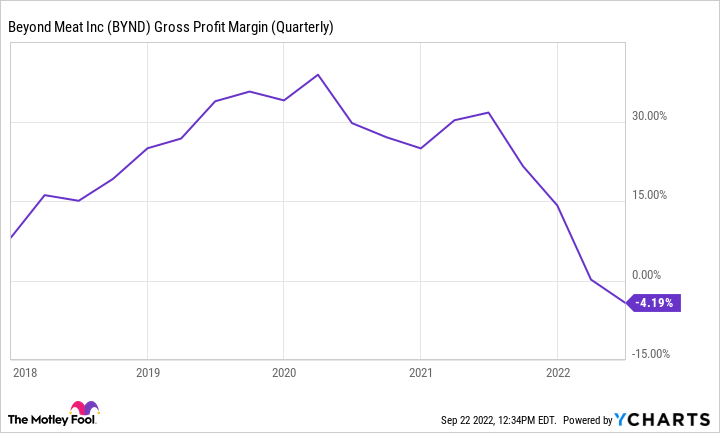 For now, I believe Beyond Meat’s gross margin is one of the most important things for investors to watch. Management believes profitability will start improving soon, and that’s important if the company is going to stop its cash burn and get back to focusing on price parity at the grocery store.

However, while investors are watching gross margin, they should also watch how the Beyond Carne Asada Steak test goes. If Taco Bell fails to expand the test or launch it nationwide, it will be because it didn’t sell well. And if that’s the case, it could mean that comparable pricing isn’t enough to compel carnivores to eat plant-based alternatives more often.

Conversely, if Taco Bell does quickly launch Beyond Carne Asada Steak nationwide, this could indicate Beyond Meat will be a force to be reckoned with if it can ever undercut traditional meat. It might just be the secret weapon it needs.

Therefore, Beyond Meat’s menu item with Taco Bell isn’t necessarily significant on its own, but it could be an important barometer for the company’s long-term market opportunity.


Read More: Is This the Secret Weapon Beyond Meat Stock Needs?

The cost of gas is dropping. Here’s why, and how long the lower prices might…

Today Stock News Nov 30, 2022 0
Comment on this storyCommentThe cost of gasoline is falling so fast that it is beginning to put real money back…

Why Netflix, Apple, Amazon, and Other FAANG-M Stocks Rocketed Higher…

Nov 30, 2022
What happened Uncertainty regarding the length and duration of the downturn have hung over the market like an…