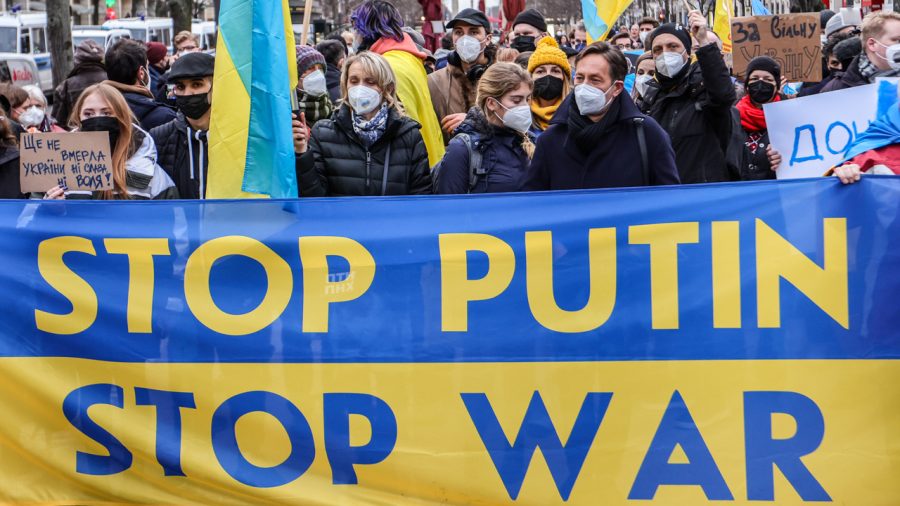 BERLIN, GERMANY —FEBRUARY 22: A woman holds a Ukrainian flag next to a banner reading stop Putin as youth groups protest Ukraine intervention with human chain in front of the Russian Embassy on February 22, 2022 in Berlin, Germany. Yesterday, Russia recognized two breakaway regions of eastern Ukraine as independent republics and said it would send troops in “peacekeeping functions,” prompting widespread condemnation from Western governments.

Editor’s Note: This story is ongoing and will continue being updated with further developments.

For weeks the Russian Federation led by Vladimir Putin has been posturing and positioning for war. Shortly before 06:00 Moscow time on Feb. 24, the first large-scale invasion on European soil in decades began. While Putin has called it a “special military operation,” the full-scale invasion of a sovereign state is something that cannot be understated.

The invasion took place over the course of a few hours as troops invaded from Ukraine’s eastern border, Russian occupied Crimea, and Belarus, a strong Russian ally. There were multiple reports of bombs being dropped throughout the country in the early hours of the invasion.

Dr. Elizabeth Huffman, a professor at Cosumnes River College whose specialty is former Soviet states, has said that this invasion makes little sense from the economic perspective that we in the west tend to think of. “With Crimea, Russia already has unfettered access through the Black Sea. Sure, Ukraine has ores, but Russia has plenty. And while Russia claims to need to protect its border, no army has come even close to threatening Russia with invasion since Hitler,” she stated when asked about the invasion.

From the perspective of the modern liberal economic system that we live in, this also proves disastrous for Russia; CNBC reports that the ruble has hit a record low following the invasion of Ukraine, and much of the value of Russian natural gas comes from deals with European neighbors. The Russian stock market has also hit record lows as sanctions are levied against Russia from Europe and the United States.

There seems to be only one line of logical reasoning to the cause of this unprovoked invasion; to reclaim a lost glory. Huffman says that “this is an emotional, symbolic or ideological cause.” The invasion of Ukraine shows the changing power structure on the world stage; the fall of American power, and the rise of a Russian sphere.

The U.S., and Joe Biden in particular, are caught in a few problematic positions. War with Russia to protect Ukraine, win or lose, proves terrible for a president facing high inflation rates, low wages, and a difficult midterm season.

As of Feb. 24, the president is facing criticism from Republicans as well as Progressive Democrats. Republican lawmakers seem to suggest that Biden’s leadership is directly responsible for the Russian invasion, while the Progressive Caucus has released a statement to Biden stating that any military action will require congressional approval.

The other option, continuing to levy sanctions, also proves tenuous as it shows American allies that the U.S. cannot, or will not, protect them. As of Feb. 24, this has been Biden’s decision, and he has received bipartisan support for this. As it is now too early to tell, the effects of this decision have yet to be fully fleshed out. If this is about the rise of Russian glory, rather than any benefit for Russia, then sanctions will likely have little to no effect on Russian hostility.

If the Russian invasion of Ukraine continues as it has over the past twenty-four hours, then Russian forces will be in control of Kyiv before the week is out. Russia dominating Ukraine means a recognition of the Donetsk and Luhansk People’s Republics as well as likely a ceding of Crimea to Russia. There would also likely be a puppet state organized in the remainder of Ukraine to protect Russian interests in the region.

This would once again be a blow to the U.S. internationally as well as something greatly beneficial to Russian power among the former Soviet states. Historically, we’ve seen that one invasion typically results in a ripple effect that leads to other authoritarian states invading their neighbors. The first to come to mind is a possible Chinese invasion of Taiwan.

The U.S. is a strong ally of Taiwan and has been since the 1970s. If the U.S. does nothing for Ukraine, its hand would be forced into Taiwan.

Stock Market Highlights: Nifty forms Long Bearish candle; what does it signal for

Why the ‘sell Rosh Hashanah, buy Yom Kippur’ is a tough call as stock…

Why the ‘sell Rosh Hashanah, buy Yom Kippur’ trade is a tough call as…

BNP: Attackers are being marked

South-east Asian equities: the good news and bad news for investors – US

Trump, interest rates and you

The Fed raised interest rates again. What does that mean for the economy and…