EV stocks closed the week ending Feb. 11 on a mixed note amid the broader market volatility. Tesla Inc (NASDAQ: TSLA) continued to be haunted by recalls, but CEO Elon Musk scored a victory in his pursuit of an endorsement from President Joe Biden. Meanwhile, the Chinese EV trio listed in the U.S. found themselves amid the news headlines.

Here are the key events that happened in the EV space during the week:

Tesla Recalls More Vehicles, Biden Finally Spells Out Tesla: Tesla had at least 2 recalls announced this week – the first one to fix a software error that could affect windshield defrosting and the second one due to a Boombox function that allows drivers to play sounds over an external speaker that can affect audible warnings for pedestrians.

Quality issues continue to plague Tesla’s vehicles, although Tesla backers are shrugging these off as issues that can be fixed with software updates.

President Biden, a proponent of clean-energy vehicles, has not taken Tesla into his scheme of things for the electrification of the U.S. The President had roped in legacy automakers and EV industry suppliers to further his EV agenda, consciously leaving out Tesla every time. It is believed that the United Auto Workers union was behind the Tesla snub, as the EV maker’s employees are non-unionized.

In another development, Tesla is planning to set up its first design studio in Beijing, reports said, citing government documents.

In another interesting development, Ford hinted at going back on its plan of winding up manufacturing operations in India. Ford is reportedly considering resuming operations in the country to manufacture EVs. The company is eyeing India as an export base, although it did not rule out eventually selling EVs in India.

The Indian government, meanwhile, has included Ford among 20 companies that are eligible to avail incentives under the country’s $3.5 billion scheme to promote clean-energy vehicles.

Separately, Ford said it has begun deliveries of E-Transit, the electric version of its top-selling cargo vans, from the Kansas City Assembly Plant, and it is working on increasing production.

Li Auto To Double Production: Li Auto, Inc. (NASDAQ: LI) is planning to step up production, CnEVPost reported, citing an article published by the local government of Changzhou city, where the company’s production base is located.
The company is planning to produce twice the number of vehicles that rolled off its production lines in 2021. Last year, the company sold 90,491 units of the Li ONE model.

XPeng Expands Further Into Europe: XPeng, Inc. (NYSE: XPEV) announced two partnerships that will facilitate its expansion into Sweden and the Netherlands. The company also said it plans to open company-operated retail experience stores in both countries.

XPeng was included in the stock connect program that links stock markets in Mainland China and Hong Kong, and this facilitated strong inflows into the stock, according to reports.

Faraday Future Intelligent Electric Inc. (NASDAQ: FFIE), which has been struggling to release its first EV model – the FF 91 Futurist -, said it has inked a deal with South Korea’s Myoung Shin Company to manufacture a new luxury mass-market EV called FF81. The company expects to launch the vehicle in the third quarter of 2022.

GM To Resume Bolt Production? General Motors Corporation (NYSE: GM) said it is planning to restart production of the Bolt EVs and make an announcement in this regard as early as next week, the Detroit Free Press reported, citing people familiar with the matter.

The automaker had stalled production of the EV to fix defective batteries following a global recall of about 140,000 vehicles. Additionally, the company is reportedly planning to accelerate EV production, including the Cadillac Lyriq SUV in 2022.

EV Stock Performances for The Week: 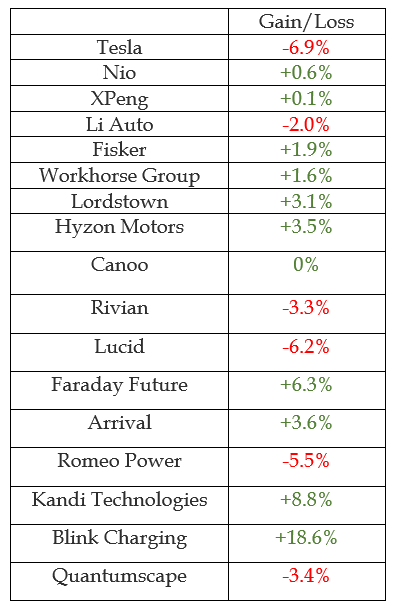 © 2022 Benzinga.com. Benzinga does not provide investment advice. All rights reserved.

Could Housing Affordability Cause the Next Housing Crash?

What Is Going on With Lava Therapeutics (LVTX) Stock Today?

Hot Penny Stocks to Buy This Week? 3 to Watch Now

Singapore-based FII buys stake in this multibagger penny stock. Do you own?