Former RCMP intelligence expert and B.C. casino analyst Scott McGregor says the Commission of Inquiry into Money Laundering in B.C. missed an examination of possible foreign state-sponsored transnational organized crime in the province. Counsel for the commission note the inquiry was provincially mandated and federal issues fell out of its scope | Photo: Chung Chow

The Commission of Inquiry into Money Laundering in B.C. will table its final report June 3, however there will be some questions left unexplored, counsel for Commissioner Austin Cullen concedes.

First, the inquiry did not explore potential transnational organized criminal networks and foreign state actors behind the illicit movement of cash through B.C. casinos and other sectors of the province’s economy.

Nor did the inquiry explore money laundering in British Columbia’s securities industry — this at a time when the U.S. Securities and Exchange Commission and U.S. Department of Justice have issued some of the most significant and historic indictments against Vancouver-based market participants accused of laundering proceeds of securities fraud.

“If we’d had a five-year or seven-year mandate, we would have explored a lot more corners of the activity that is underway,” said Martland. “But I think the inquiry is really driven by the need to cover ground, make decisions, try to report on all the sectors of the economy that are in the mandate, and do our best to be focused on what are the best sort of set of recommendations that we at the commission can give to the provincial government at the end of the day.”

Curtain not lifted on casino network

Scott McGregor, a former Canadian Armed Forces veteran, RCMP intelligence officer and Gaming Policy and Enforcement Branch (GPEB) analyst describes money laundering through casinos — which garnered most of the inquiry’s time — as symptomatic of a larger issue at hand: so-called “hybrid warfare” being conducted by international “threat streams,” including the People’s Republic of China and the Islamic Republic of Iran in concert with local and transnational criminal organizations, including Mexican and South American cartels.

The inquiry thoroughly explored government regulations that led to routine buy-ins with duffle bags full of drug-laced cash, amounting to hundreds of millions of dollars during the 2010s. But McGregor said there was little further examination of the people behind the source of cash.

“The transnational nature of everything, I think, that’s kind of what’s been lost. You see a couple people saying something about it and they [the commission] just gloss over it,” said McGregor, who now works in private security.

McGregor mirrors much of what the United States asserts about the Chinese Communist Party (CCP) — that its officials are willing to utilize organized crime to further its national interests, be it economic growth for the People’s Republic of China or economic and social upheaval in Western jurisdictions. This, says McGregor, is “hybrid warfare,” which also includes tactics such as cyber espionage and promoting online misinformation abroad — two matters Canadian intelligence officials have broadly identified.

McGregor says there is enough “intelligence” from the casino network that warrants further investigation an inquiry is expected to offer.

On at least two occasions the commission did hear testimony that transnational organized crime and state actors were part of intelligence gathering from B.C. casino activity.

But there were no specific follow-up questions directed to Chrustie.

Likewise, former BCLC anti-money laundering director Ross Alderson stated, “I saw how many of these [Chinese casino] patrons were linked into real estate transactions, into other transactions; that these were people with criminal links — that, I was given information from police — and not only that, but some very concerning links to the Chinese Communist Party.”

The commission counsel did not inquire further.

Yet, part of the network of gamblers includes a high-profile member of China’s People’s Liberation Army (PLA) and known associate of China’s consul general in Vancouver. Internal casino records filed in B.C. Supreme Court show the PLA member being provided $4.2 million in 2015.

And, one commission exhibit revealed a list of Vancouver lawyers used to conduct real estate transactions for a casino network leader. Among them are at least two with past employment or special relationships with the Chinese government.

McGregor said during his time at GPEB he understood the Office of Foreign Asset Controls — a financial intelligence and enforcement agency of the U.S. Department of the Treasury — to be actively monitoring business and real estate transactions in Vancouver. The office enforces economic and trade sanctions based on U.S. foreign policy and national security goals.

One prominent link between CCP officials and criminal networks is Wan Kuok Koi, commonly known as “Broken Tooth,” a leader of the 14K Triad and also a member of the CCP’s Chinese People’s Political Consultative Conference, according to sanctions by the U.S. Department of the Treasury.

A case study by commission counsel did however reveal the magnitude of suspected dirty money flowing from offshore accounts into Vancouver real estate and how some of those accounts had arm’s-length ties to members of the CCP, as well as Wan (Broken Tooth).

But counsel never examined witnesses on this matter.

China’s consul general in Vancouver told Glacier Media assertions such as McGregor’s are false and counterproductive. Contrary to such claims, it told Glacier Media about measures it is taking to curb illicit fentanyl and synthetic drug precursor exports from its country.

“It is disappointing that for all the goodwill and sincerity of the Chinese side, for all its strenuous efforts and huge sacrifices, as well as the great achievements of China’s international cooperation in drug control, some foreign politicians and media are still hyping up such disinformation as ‘fentanyl mainly [originates] from China.’”

The 2021 Global Organized Crime Index (partly funded by the U.S. State Department) has noted top-down anti-corruption measures from China aim to address “extremely high levels of corruption at lower levels of government;” however, such measures are “often implemented with political objectives in mind in the interests of the Chinese government.

“It is important to note that there has been a certain symbiosis between the interests of local authorities and those of the mafia groups for many years, with the latter being used by the former to gather information and disrupt demonstrations, most recently pro-democracy protests in Hong Kong, for example,” noted the report.

But Martland said the scope of the inquiry was provincial and the commission was limited by time, so national security matters were left to the side.

“As a matter of public importance, there’s no disputing that that set of questions around foreign interference are very significant, profound questions. It is challenging as a provincial commission of inquiry. And I’m guessing you probably saw a bunch of closing submissions, seen or read or both, what Canada had to say, to sort of really point to jurisdictional limits on the commission. And at a very general level here, I would say, it’s generally not exclusively, but primarily the federal government engaging with international questions way more than the provincial government,” said Martland in an interview.

Meanwhile, the federal government only provided assistance to the inquiry. It did not cross-examine any witnesses or question exhibits that pointed to possible foreign interference or activities against Canada’s national security.

Attorney General of Canada representative BJ Wray informed the commissioner in closing remarks that the inquiry could not pass judgment on the internal prioritization of investigations or the commitment of resources or on any other internal administrative and management decision of a federal entity.

The commissioner may, however, make factual findings about federal entities and the regime under which they operate, said Wray.

According to the inquiry’s terms of reference set out in May 2019, the commission may make findings of fact in relation to, among other matters, “the use of shell companies, trusts, securities and financial instruments for the purposes of money laundering.”

But the provincially regulated B.C. Securities Commission (BCSC) was never called to provide testimony as to how it’s managing anti-money laundering regulations.

The B.C. Securities Act contains no anti-money laundering provisions and, said Kladko, “while there is no single individual in charge of anti-money laundering at the BCSC, many different staff contribute to AML efforts as part of their duties. If we encounter signs of such activity in the course of enforcing the Securities Act, we refer it to the appropriate authorities, including FINTRAC and the RCMP.” 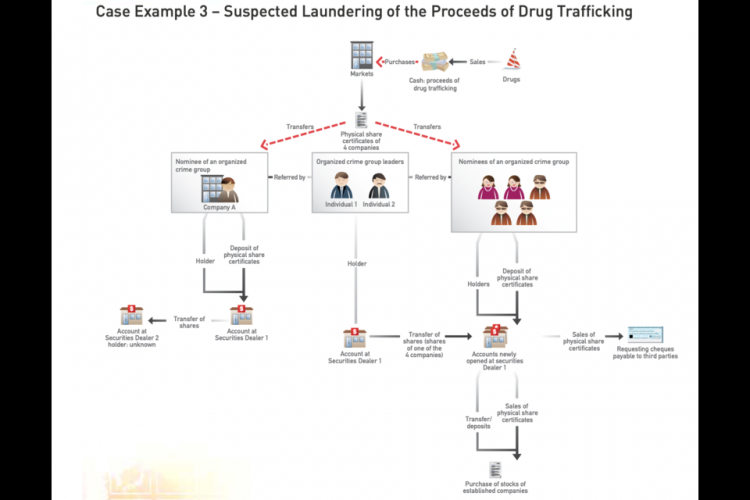 A 2013 FINTRAC report on money laundering in the securities industry shows the potential for drug proceeds to make their way into the market | Photo: FINTRAC

In 2016, the Financial Action Task Force (FATF) rated Canada non-compliant for not having explicit requirements on life insurance entities and securities dealers for customer due diligence information and related record-keeping obligations.

In 2021, the FATF noted Canada had amended its regulations to fix this loophole.

This raises questions as to what other deficiencies the inquiry could have found in B.C.’s securities industry, which has a history of fraud and corruption, according to Saint Mary’s University criminologist Stephen Schneider.

“The securities market represents one sector of the economy that has long been victimized by organized crime and the Canadian capital markets have not escaped the attention of criminal syndicates,” noted Schneider in a 2004 report.

Schneider testified at the inquiry and provided a literature review of money laundering in Canada in May 2020.

His review noted, “in short, the stock market is an industry that is ‘at tremendous risk of victimization by organized crime’ and as a conduit for money launderers specifically,” according to Gary Nichols, a former head of the RCMP Proceeds of Crime Section for Greater Toronto.

“In an increasingly deregulated environment, where more and more trading is done electronically and in private, the stock market supplies an ideal venue for money laundering,” asserted Schneider. 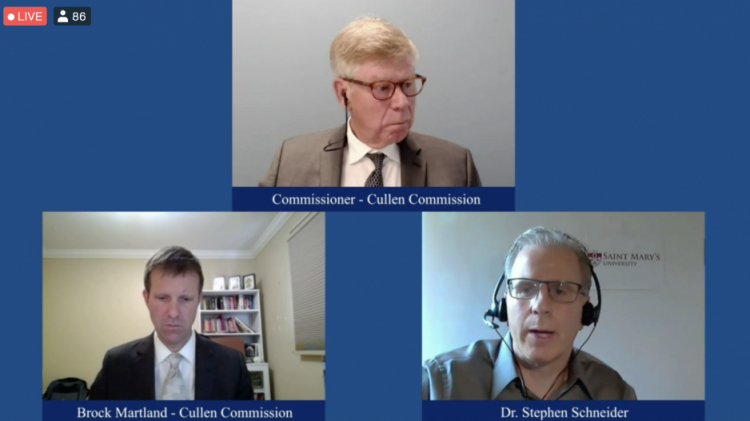 “Money-laundering methods through the securities market can be grouped into three broad categories: (i) purchasing and manipulating investments with the proceeds of such crimes, (ii) using laundering methods and techniques as an extension of stock market fraud, and (iii) taking a criminally controlled company public by offering shares,” he stated.

It is the second category that has brought B.C.’s capital markets under the microscope of the U.S. Securities and Exchange Commission.

Since last August over a dozen British Columbians have been charged in related civil and criminal proceedings.

Criminal indictments include one B.C. Hells Angels Motorcycle Club member involved in a broader network of alleged schemes that involves over $1 billion of securities trades grossing over $770 million in profits secured via the use of offshore shell companies held under nominee owners. And much of the money obtained by the British Columbians flowed through local brokerage firms (provincially regulated) and financial institutions, according to indictment records.

A 2013 money laundering report by the Financial Transactions and Reports Analysis Centre of Canada (FINTRAC) highlights how perpetrators of so-called pump-and-dump schemes work with criminal organizations to wash fraudulent proceeds. In other instances, illicit drug proceeds may be converted into shares through a network of nominees and securities dealers.

Why Alibaba, Nio Stocks Are Surging In Hong Kong Today