Why is the SPY falling and what next?


Global equity markets look a little shaky on Thursday as finally some reality bites. Nothing can keep going up, even in Fed-pumped goldilocks land and finally, equities are pausing to realize this fact. The last two weeks have seen a series of record highs set by the major stock indices, the Dow, Nasdaq and S&P 500. The table below courtesy of Charlie Bilello shows the strong series of record highs so far in 2021. The period since 2013 has been one of the strongest in stock market history. It is no coincidence that this coincides with a massive global central bank stimulus program, also known as money printing for the more cynical. 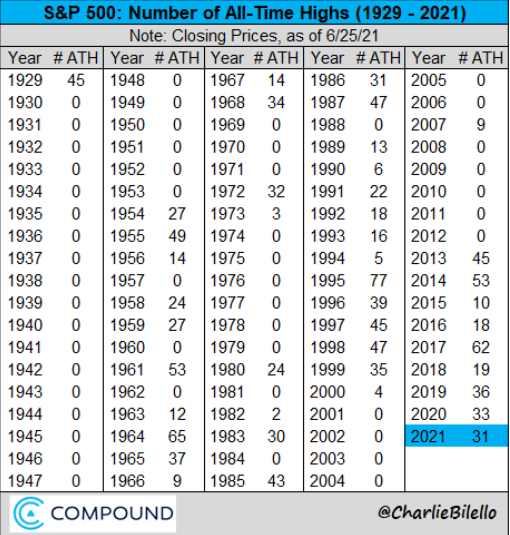 The SPY did manage to set another record high close on Wednesday, but Thursday is a different story with the ETF down 1.35% in the premarket at $428.59.

Why is the SPY falling today?

1. The Fed minutes released on Wednesday afternoon were more hawkish than many investors thought. Hawkish means rate rises, and markets do not like rate rises. Some Fed members admitted that tapering the massive asset purchase plan could begin sooner than anticipated. There is a very strong correlation with this asset-buying program and the SPY.

2. The recent data has not been strong with the US ISM data being disappointing. Again some Fed members alluded to this in the minutes released yesterday.

3. Delta variant. The new covid strain is spreading rapidly and is set to become the dominant strain globally. It is rampant in Europe with several EU countries delaying reopening plans. Australia has gone into regional lockdowns Tokyo has declared a state of emergency and also just now stated that the Olympics will take place without fans. Lockdowns hurt economic growth.

4. Oil prices. High oil prices hurt economic growth and oil prices surged to multi-year highs earlier this week. Saudi Arabia increased prices for the US and EU, and OPEC harmony has been hurt by UAE and Saudi Arabia haggling. The price has fallen as the UAE is due to increase supply, but the uncertainty has hit markets.

6. Earnings season approaches, and the comparison with Q1 is a tough one. Keeping up with the last earnings season makes for an incredibly tough comparison. Stocks may have gotten too far ahead and now investors are beginning to realize that this earnings season may prove impressive but not quite as good as Q1.

SPY has retraced to the 9-day moving avearge with support form the 21-day at $426. The strength oscillators, Relative Strength Index (RSI) and Commodity Channel Index (CCI) both showed as overbought last week giving us some warning of what was to come. The Moving Average Convergence Divergence (MACD) has also been giving a bearish divergence, trending lower despite the SPY trending higher.

The first buy-the-dip zone in my opinion to try is not until $420 as volume picks up here. This will take the SPY out of the lower trend line in place since November 2020, but only a break of the last significant low at $414.70 really ends the short-term bullish trend. This zone from $415 to $420 is a good support zone. The volume profile is high, and the 100-day moving average is not far away from here. 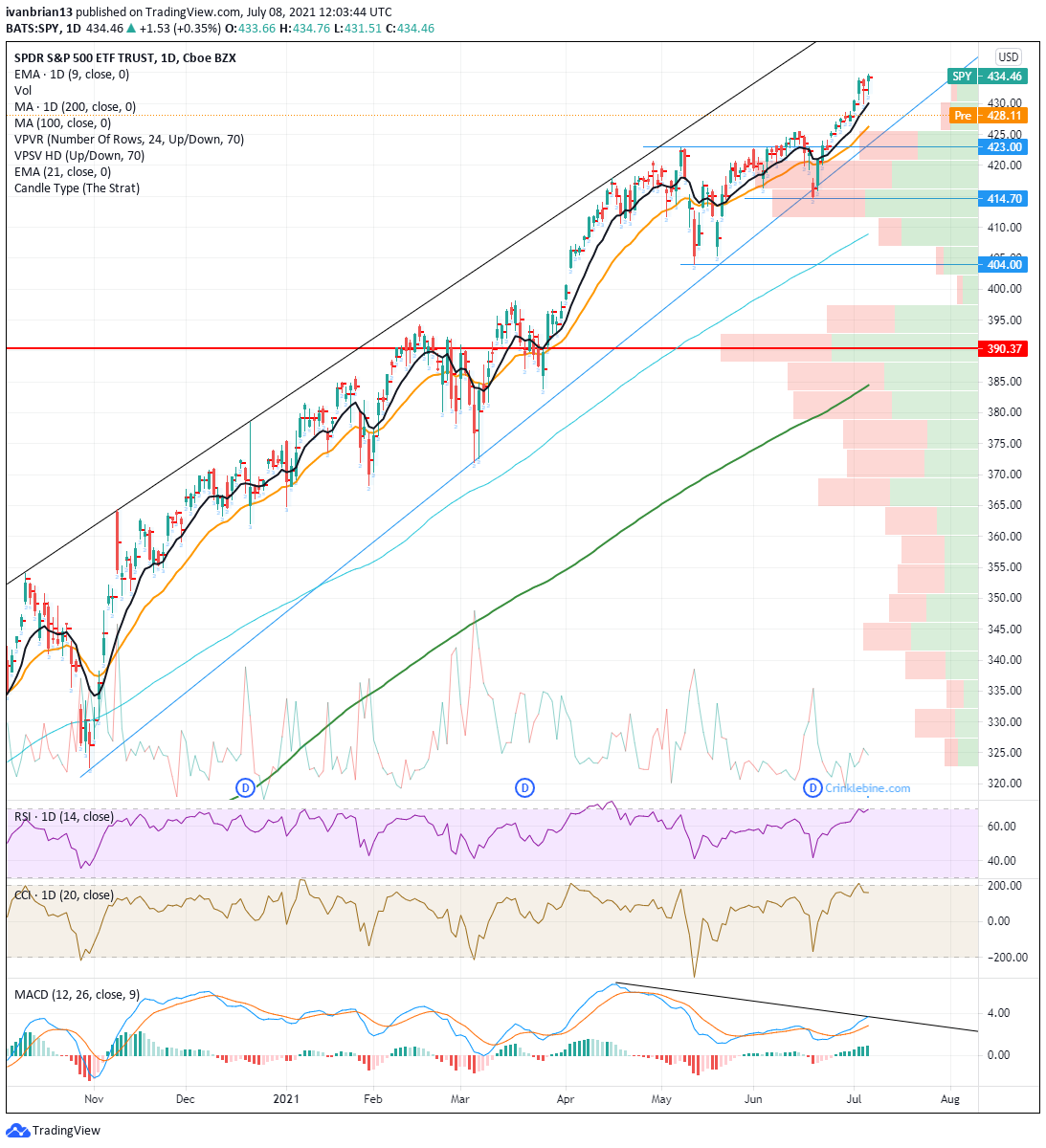 Read More: Why is the SPY falling and what next?

US Stocks On Track For Weaker Start To The Week: Disney Gains On Iger’s Return,…