Lordstown Motors (RIDE 47.02%) stock is absolutely crushing the markets today. Shares of the embattled electric-vehicle (EV) manufacturer were trading up — hold your breath — a staggering 47% as of 12:50 p.m. ET Thursday. The stock had surged as high as 58.3% at its highest point in trading today, as of this writing.

Lordstown Motors, which is on the verge of bankruptcy, was just thrown a lifeline, and the market now can’t seem to keep its hands off the penny stock.

Just earlier this week, Lordstown Motors shares crashed after the company warned it may not be able to close its deal with Taiwanese electronics-giant Hon Hai Precision (HNHPF -4.01%), better known as Foxconn. Yesterday, however, Lordstown Motors finally closed the deal and sold its Lordstown facility to Foxconn.

Under an agreement first entered into in November last year, Lordstown Motors sold its vehicle-assembly plant in Ohio to Foxconn for $230 million, excluding an additional $27 million in reimbursement for certain costs. 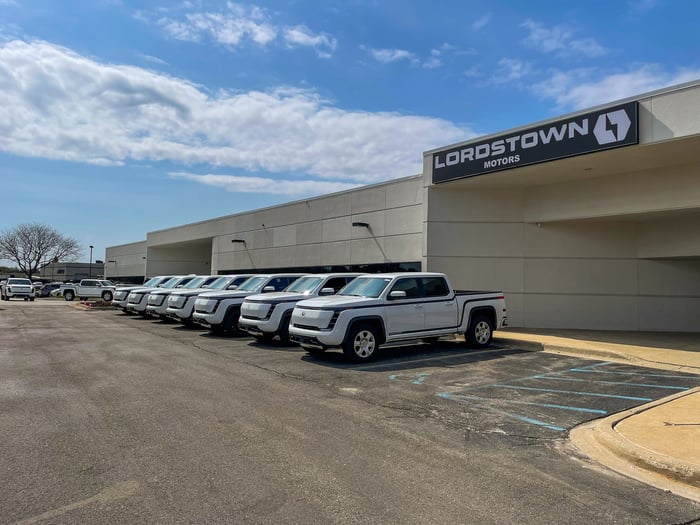 Concurrent with the sale and as agreed upon earlier, Lordstown Motors and Foxconn also signed a manufacturing-supply agreement for Lordstown Motors’ flagship EV, the all-electric pickup truck Endurance. Put simply, Foxconn will manufacture Endurance pickup trucks at the Ohio facility, although both companies will share much of the risk and responsibility related to production, such as sourcing of raw material, vehicle testing, legal compliance, and warranties on vehicles.

The two companies will together develop Endurance, with production expected to start in the third quarter and first commercial deliveries by the fourth quarter. Aside from Endurance, Lordstown Motors and Foxconn will also jointly develop new EVs using Foxconn’s open-source EV platform under a joint venture, 55% of which will be owned by Foxconn.

Lordstown Motors called the deal a milestone, with CEO Daniel Ninivaggi stressing how its partnership with Foxconn provides the company with “a flexible and less capital-intensive business model, access to broad supply chain and software capabilities and an effective vehicle development platform to bring EVs to market faster and more efficiently.”

This all sounds good, but Lordstown Motors is still strapped for cash and requires $150 million more this year — over and above the Foxconn deal’s proceeds — to survive. It’s hard to see how the company will get there, but going by the dramatic reaction to the stock price today, the market is clearly convinced right now that Lordstown Motors will not just escape bankruptcy, but perhaps also thrive once Endurance starts rolling out. I’d call it the market’s short-sightedness.

How Meta Platforms’ New Store Will Usher In the Metaverse

Beachbody, Athira Pharma And This Penny Stock Insiders Are Aggressively Buying By…

EXCLUSIVE: Top 10 Searched Tickers On Benzinga Pro In November 2022: Where Do Tesla,…