The move comes after Lucid announced a deal to sell at least 50,000 of its EVs to the government of Saudi Arabia over the next 10 years. Beyond that initial commitment, there is an option for an additional 50,000 vehicles to be provided within the same time frame. The deal shouldn’t come as too much of a surprise to investors, as Lucid has had a strong relationship with Saudi Arabian authorities for several years. 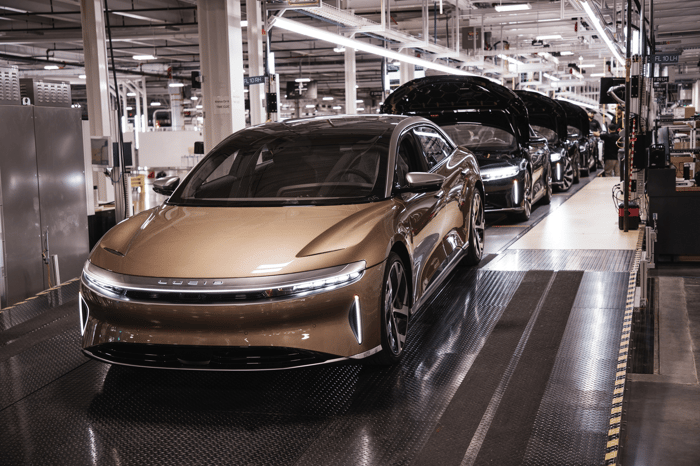 Today’s stock move should be taken in context. Lucid shares were down 30% in the last month prior to today’s move. That drop was in line with the recent decline in growth stocks. But there is also concern about how supply chain challenges and raw material costs might affect Lucid as it works to ramp up production.

The newly announced order boosts the longer-term view, however. Lucid has a long-standing relationship with the Saudi Arabian government. Saudi Arabia’s sovereign wealth fund invested more than $1 billion in Lucid in 2018, helping to fund the building of Lucid’s Arizona manufacturing facility.

More recently, the EV maker announced it will build its second production facility, its first outside the U.S., in Saudi Arabia. It will initially be used to assemble vehicle “kits” manufactured at the Arizona plant. Lucid intends to eventually produce as many as 150,000 complete vehicles per year at the Saudi plant.

Today’s announcement seems to be a natural progression of the relationship. A concrete order is a helpful base for the company to use to ramp production up, though. The initial vehicles will come from the Arizona plant, with shipments beginning no later than the second quarter of 2023. Investors are happy to see the relationship paying dividends for the business today.

Dec 7, 2022
More money will be coming to the paychecks of those that work at the state minimum wage level. But there may…