It had been a really rough month for Lucid Group (LCID 14.79%) shareholders going into today’s trading session. The stock was down more than 30% over the last month, but today’s market jump put a big dent in the month-long decline. As of 2:53 p.m. ET, Lucid shares were up 15%, after rising nearly 17% earlier in the day.

A big part of today’s jump comes as the overall market is back to favoring higher-risk growth stocks. The rally also stems from relief that Lucid and other early-stage electric vehicle (EV) companies that have been reporting quarterly updates recently have maintained 2022 guidance. But Lucid also had some company-specific news today, with the opening of its first European studio. 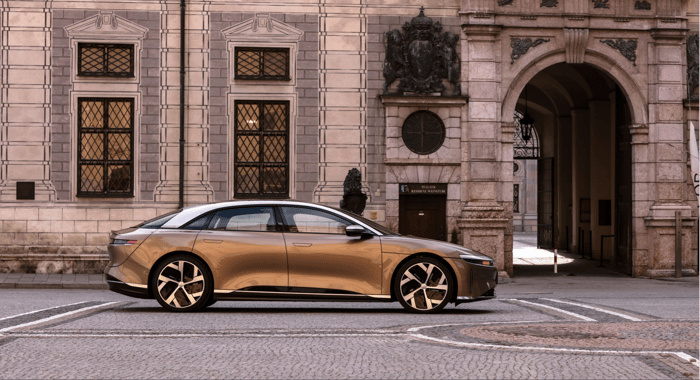 Along with the studio, Lucid announced it will be making its first vehicles available for the European market. The company will begin by offering both Air Dream Edition models — the Range and Performance editions.

These models will retail in Germany for the equivalent of about $226,000 including a 19% value added tax and other fees. The Dream Edition Performance provides more than 1,100 horsepower, while the Range is rated for about 560 miles of range on a single charge.

Lucid expects initial Dream Edition deliveries to begin in Europe in late 2022, along with more pricing and delivery details for its other models. The company expects to continue to expand throughout Europe and says it has picked its initial locations based on charging infrastructure, as well as market acceptance and size.

The official start to the move into Europe is giving investors reason to jump into the stock today, as the market seems to feel the slide in many EV names has gone far enough.