There wasn’t much company specific news from these three today, but their shares being down so much on the year already, combined with some marginally favorable news this morning on interest rates and geopolitics, was enough to get their stocks moving higher.

Equity investors may not have noticed, but Treasury Bond yields may be determining your stock portfolio performance this year more than you think — especially when it comes to technology growth stocks.

This is because the value of a stock is equal to the present value of its future cash flows, and that present value is determined in part by interest rates. Moreover, since growth stocks have a lot of their profits well out into the future, they are highly sensitive to long-term bond yields. This wasn’t as much of a concern when interest rates were very low for the better part of the last decade, which saw growth stocks outperform.

If you take a look at the movement in the 10-year Treasury yield against the Nasdaq this year, they are nearly mirror images of each other: 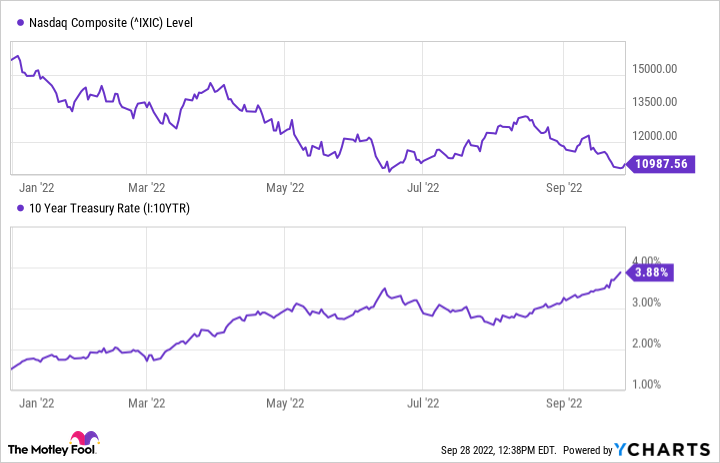 In recent days, as the Federal Reserve has become incrementally hawkish and started accelerating its quantitative tightening program to get control of inflation, the 10-year yield has rocketed past its previous June highs and briefly surpassed 4% last night — a level not seen since the global financial crisis of 2008-2009.

However, today those yields bounced lower, falling back nearly 20 basis points to 3.77% as of this writing. That’s a big drop, giving relief to technology stocks.

In addition, the Bank of England reacted today to the country’s currency and interest rate crisis, announcing that it would not begin selling the country’s bonds to combat inflation as planned, but would rather temporarily begin buying U.K. government bonds in order to stop yields from spiraling higher. The British pound has been collapsing ever since the new Truss government announced a large unfunded tax cut for the wealthy, which backfired and caused a crisis of confidence in the U.K.’s currency.

The situation had even spurred some economists to say there was a risk of international contagion in recent days, so to see the Bank of England step in was also encouraging. Nvidia, Meta, and Palantir all have significant international sales, so to see a currency crisis averted — at least for a day — also relieved some pressure.

Incrementally good or relieving news can cause big rallies in beaten-down stocks, and these three are definitely that. Nvidia and Meta are each down 64% from their all-time highs, while Palantir is down 83%.

Is the bottom for these stocks in sight? It’s hard to say. Meta definitely looks extremely cheap, trading at just 11.7 times earnings. Nvidia still trades at a lofty 34 times earnings, but it is in a cyclical downturn at the moment. Palantir is currently unprofitable under generally accepted accounting principles (GAAP), although it’s free cash flow positive, and its commercial offerings appear to be taking off.

While the world is highly uncertain and the near term looks to be volatile, these stocks all look attractive at the moment when taking a long-term perspective, since they each play into the big data and artificial intelligence (AI) revolution in different ways.

Meta is investing heavily in its AI engine this year, quintupling the Nvidia GPUs in its data center to make its short-form video Reels offerings as compelling as TikTok’s. It is also making a big bet on the metaverse, which could pay off in the years ahead and is currently being ascribed no value by impatient investors.

Nvidia’s gaming chip sales are down this year as PC sales have hit an air pocket, but it has a lead in GPU chips that power AI-based decision making. It also just released its exciting new Lovelace GPU chips last week. Palantir offers compelling big data software that has been proven effective in the most demanding environments, including that of the CIA and U.S. military, and is now being discovered by large corporations.

These stocks look attractive, and each offers something different. Meta is a more mature platform that is now compelling for value investors. Nvidia may be compelling for growth-at-a-reasonable-price, or “GARP,” investors, while Palantir may be interesting for younger investors who can take a risk on a high-growth name that is not yet profitable.

The near and medium terms for these stocks will likely be determined by interest rates and the potential for a global recession. However, if investors assume interest rates will eventually stabilize and that these companies willeventually make it to the other side of a recession, if there even is one, each looks compelling — as do a lot of beaten-down tech stocks.