Solar energy stocks had a good day for a change on Tuesday as the market bid up technology and growth stocks. The market’s move was a reaction to Russia pulling some troops back from the Ukraine border and possibly opening up diplomatic talks. Solar stocks are typically very volatile, so when the market moves up or down, the moves are magnified in solar stocks. Today, the S&P 500 closed 1.6% higher, and the Nasdaq Composite was up 2.5%, which is likely a big driver of solar stocks today.

Another notable move in the market was oil prices falling 3.6% to $92 per barrel on easing tensions with Russia. Lower oil prices have generally been seen as a bad thing for solar energy stocks, but that trend didn’t hold today.

Another potential headwind was rising interest rates. In the U.S., 10-year government bonds saw a six basis-point increase to 2.04%, continuing a steady increase over the past year. Higher interest rates mean higher borrowing costs for solar developers, which can make solar less cost competitive in the market. Normally, when rates rise, solar stocks fall, but again the market moved in the opposite direction today.

Most of today’s move can be attributed to the market moving higher and that pulling solar stocks with it. If you look at the three-month chart below, you can see that shares of solar stocks were hit much harder by the recent sell-off than the market overall, and this is clawing back some of those losses. 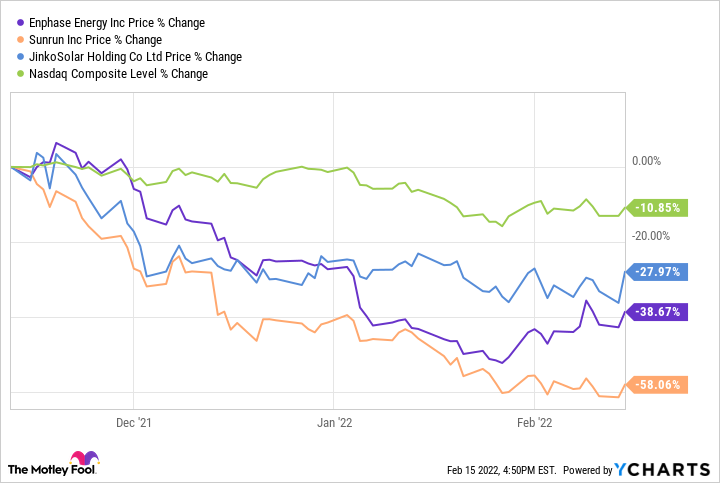 Long-term, the growth story is still intact for solar stocks because the industry is taking market share from fossil fuels, and costs continue to improve. But the rise in interest rates will be a headwind that financiers of projects have to deal with. The upfront cost to build solar plants won’t change, but the price of electricity needed to make them profitable may rise as interest rates increase.

From the commodity side, I wouldn’t pay attention to oil or even natural gas prices because they have only a minimal impact on solar projects. And overall, the trend of fossil fuel prices has been higher as the economy improves.

Today’s move may just be volatility, but the drop in solar stocks over the last few months could be a buying opportunity for investors, and Enphase, Sunrun, and JinkoSolar are three leaders that will be winners long-term.

Dow falls after US announces closure of Kyiv embassy

Iowa at war with tobacco companies over $110 million in payments