Why Upstart Holdings and Global-e Online Soared on Tuesday


The stock market moved sharply higher on Tuesday, overcoming mixed earnings from the retail sector. Investors instead looked at the massive declines in stocks over the first four months of 2022 and concluded that even with some reasons for worry, the downturn had been too fast. That helped set the stage for gains in the Dow Jones Industrial Average (^DJI 1.34%), S&P 500 (^GSPC 2.02%), and Nasdaq Composite (^IXIC 0.00%).

Some of the stocks that had been hit the hardest year to date were among the best performers on the day. Both Upstart Holdings (UPST 23.47%) and Global-e Online (GLBE 17.68%) were up quite strongly on the day, and shareholders seem to be having a change of heart after having been extremely negative on the high-growth companies ‘ prospects recently. Read on for the latest details on these two stocks.

Shares of Upstart Holdings jumped 23% on Tuesday. The company held its annual shareholder meeting and made a presentation at a fintech industry conference that sought to offer an explanation for some of the factors hurting the stock recently. 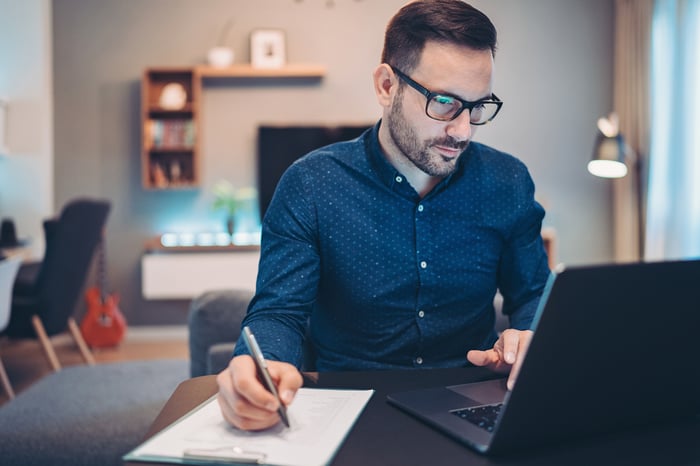 Much of the reason for Upstart’s big decline over the past week was negative reaction from shareholders about its latest financial results. In particular, investors were troubled that Upstart seemed to be keeping loans on its balance sheet rather than selling them off to investors, as the company had done in the past. Most investors were willing to accept that when Upstart enters a new lending market, holding some loans as a proof of concept is a necessary part of its research and development (R&D). However, Upstart’s balance sheet seemed to include more than just R&D loans, and that led many to fear that Upstart was taking on credit risk at a very dangerous time for the markets.

However, Upstart CFO Sanjay Datta helped to dispel some of those concerns in a presentation at the Barclays Emerging Payments and Fintech Forum. Datta explained that Upstart had hoped to help support loan volume by being willing to provide liquidity. However, the company has taken the hint from shareholders, and it now expects to put only R&D loans on its balance sheet even if it means lower loan volumes during times of stress in the credit markets.

Investors liked that response, and even though Upstart still needs to demonstrate its ability to weather a rising interest rate environment, the stock moved sharply higher. It’s worth reminding investors, though, that the stock price still remains nearly 90% below its highest levels less than a year ago.

Meanwhile, shares of Global-e finished the day higher by 18%. That was particularly impressive, given that the company’s stock opened 18% lower than where it closed Monday before rebounding sharply.

The big downward pressure early on, however, came from Global-e cutting its guidance. The company had previously expected gross merchandise volume to be between $2.445 billion and $2.495 billion, but new guidance of $2.28 billion to $2.4 billion reflected macroeconomic and geopolitical headwinds. Revenue expectations also got reduced roughly 4% to 7% to between $383 million and $403 million.

In the end, though, investors took some reassurance from co-founder/CEO Amir Schlachet about Global-e’s prospects to recover in the long run. That won’t necessarily mean an end to share-price volatility, but it was enough to help the stock pull out of its tailspin on Tuesday.

Soh Chee Wen & The Manipulation Of Penny Stocks in Singapore: A life of politics and