Why Victoria’s Secret Stock Jumped 13.5% at the Open Today

Shares of lingerie retailer Victoria’s Secret (VSCO 8.18%) popped at the open on June 1, gaining 13.5% in the first few minutes of trading. The big news was the company’s first-quarter 2022 earnings release, which hit the market after the close on May 31. The results were kind of mixed, but there was still an important underlying positive here.

Victoria’s Secret posted sales of $1.48 billion in the first quarter of 2022. That was down 4.5% compared to the first quarter of 2021, a period boosted by government stimulus payments. On the bottom line, the company reported earnings per share of $0.93, down from $1.97 in the previous year. Adjusting for one-time items, earnings per share came in at $1.11, better but still notably lower. A key drag on the company’s results was inflation, which increased supply chain costs and thus crimped margins. So far, this looks pretty negative. But it gets worse: Management is taking a cautious stance with its second-quarter forecast. Sales are expected to be roughly in line with the previous year, but earnings will be notably lower because of the aforementioned margin crunch. 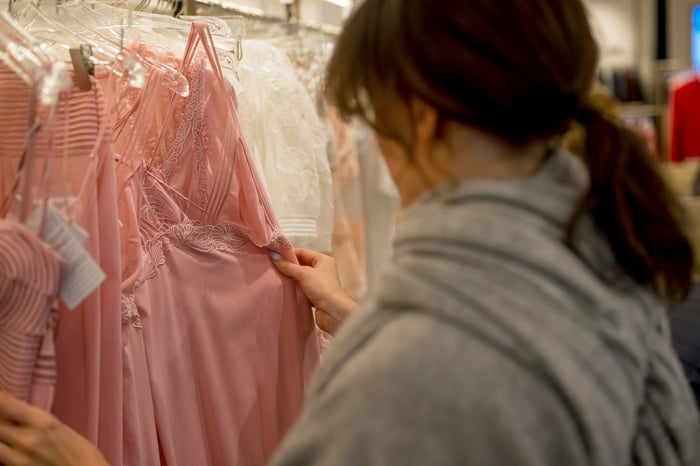 So why did the stock go up on this news? The answer requires a little history. Victoria’s Secret was struggling when it was spun off from L Brands, which is now known as Bath & Body Works (BBWI -2.44%). The goal of the separation was to put a focused management team in place that could get the company stabilized. To that end, Victoria’s Secret had a pretty good quarter. For example, sales came in at the top end of the company’s guidance range. Same-store sales were roughly flat after management adjusted for the boost from stimulus checks. And adjusted earnings were well above the company’s guidance range of $0.70 per share to $0.90 per share. Basically, the company appears to be executing well in a tough environment, and investors rightly cheered that result.

As if that weren’t enough, Wall Street consensus was for earnings to come in at $0.84 per share. So not only did Victoria’s Secret beat its own expectations, but it bested the analyst call as well. Investors normally cheer such things, so it is hardly surprising that the stock was higher. Still, the deeper dive here is that it increasingly appears that management has gotten this old-line retailer back on track.

Opinion: Why stock market stories don’t resonate with most Americans

Two companies are building in the Lisbon Business Park East

Top Industrial IT Services Stocks You Can Buy Today